Within the Europeana Space project, the Netherlands Institute for Sound and Vision leads the EuropeanaTV pilot, which experiments with the re-use of video content in an interactive TV setting. The pilot has been active for over 1 year, and Kelly Mostert reports on the results and lessons learned so far.

The Europeana Space project
The Europeana Space project seeks to prove that digitized cultural heritage material can be used in creative ways and new business and sustainability models can be developed around these innovations. Within the project there are 6 pilots running, themed around dance, games, hybrid publishing, museums and interactive TV. The project has been funded within the FP7 programme of the European Union and managed by Coventry University, with the assistance of technical coordinator Promoter S.r.l..

Why television? Isn’t TV a thing of the past?
An often heard claim is that the traditional television set in the living room is disappearing and will be displayed in museums soon as an old, obsolete medium. Studies show that young people are “watching less TV” and this number keeps declining, so is it likely that the television will disappear in the future? If you talk about the TV as a device, then yes, but if you talk about television as an experience then no – television as a social screen experience is here to stay and it is worth investing in.

Aims of the EuropeanaTV pilot
We need to see how we can bring the television experience to the newer devices infiltrating in our households: the smartphone, tablet, laptop, beamer, and SmartTV for instance. Within the pilot we are using Noterik’s multiscreen toolkit to test how we can create a set of tools to make quick prototyping easy and accesible.

The main aims are to make use of technology to create archival TV experiences with valuable content (from content partners Cinecitta Luce, RBB and Sound and Vision) and to facilitate innovative spaces where creative thinkers can experiment easily with AV applications

The EuropeanaTV pilot is unique not just aims to create demo apps for inspiration, but also focuses on building a user-friendly toolkit directly usable during 2-3 hackathons and challenge events for creative thinkers to experiment and tinker with.

What has been accomplished within the pilot so far? A lot, but let me highlight 4 things:

1. We have created the Rewind prototype, which lets you curate TV clips from the past for someone else in the living room.
Read more …

2. We have created a quick ‘hack’ for the RBB Fall of the Berlin Wall concept, which lets your tablet interact with the TV and is enriched with Europeana objects.

3. We have organised a hackathon together with Waag Society which has lead to innovative multiscreen concepts.
Watch video here.

We have created Culture Derby, a concept which uses video keyframes as a starting point for a fun interactive tagging game.
Read more …

And there is more to come: EuropeanaTV will soon launch a new website with useable AV-content, codes, and inspiration for new TV prototypes. If you are interested in new interactive concepts for video archives, then make sure to follow the Europeana Space project online or on Twitter! 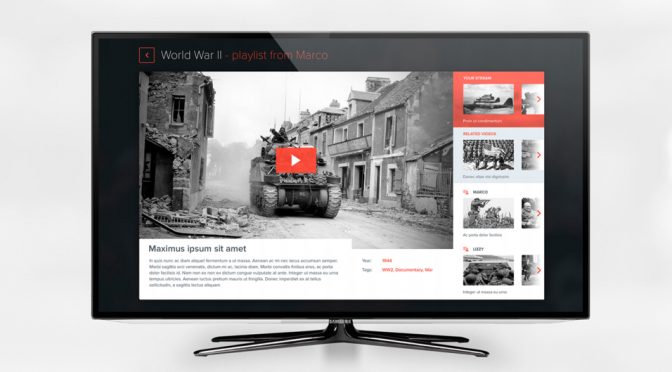