EUscreenXL on the Future of Archives at NECS 2015

The 2015 NECS Conference took place this year in Łódź, Poland on 18th-20th June. Every year NECS, the European Network for Cinema and Media Studies gathers a significant number of scholars, researchers, media professionals and archivists from all over the world. The theme of the conference was “Archive of/for the Future” and certainly, it could not be more appropriate and relevant for EUscreenXL. Thus, a team of EUscreenXL representatives participated to the event presenting an entire panel session on “Perspectives on the Contextualization of Audiovisual Online Archives: Access and Publication Formats.” The ‘dream team Łódź’ was represented by Mariana Salgado from Aalto University, Berber Hagedoorn and Eleonora Maria Mazzoli from Utrecht University, and Dana Mustata from Rijksuniversiteit Groningen.

While discovering the unknown beauties of the post-industrial city of Łódź, the conference participants attended various interesting panels, workgroups and fruitful roundtable discussions which touched upon current issues concerning the development of the archivist practice in our digital convergence era. However, the exchange of ideas and the pleasant atmosphere was not certainly constrained within the university buildings, but it actually continued almost every evening at the ‘conference club’ situated in the popular and alternative area of OFF Piotrkowska.

The EUscreenXL ‘dream team’ in Łódź at the NECS 2015 conference.

Our ‘dream team Łódź’ kicked off the first day of the conference with Dana Mustata moderating the workshop ‘Doing Archival Research on the Socialist Past.’ The workshop brought together researchers who shared practices and experiences of accessing, collecting and researching different types of historical sources related to the socialist (television) past. Drawing upon these experiences of doing archival research, the workshop foregrounded broader discussions on the historiography of socialist television past and tapped into the conceptual, methodological and archival challenges that this socialist past brings forward. Sabina Mihelj, from Loughborough University introduced the project ‘Screening Socialism’ and spoke about ‘silences’ of socialist television and transnational approaches to socialist television history.

Sylwia Szostak from Loughborough University talked about accessing various Polish archives as part of her research on Polish Television, while Cristina Preutu from Iassy University spoke about the Radiotelevision Files hosted at the Council for the Study of the Securitate Archives. From a different perspective, Agata Kołacz from the National Audiovisual Institute of Poland (NiNA) spoke about the resources, facilities and modes of engagement that a cultural heritage institution like NiNA offers researchers in the digital age.

Photo from the workshop ‘Doing Archival Research on the Socialist Past.’ © NECS 2015

The opening day was concluded by the keynote speaker Giovanna Fossati who shared her thoughts and experiences on the possibilities and challenges of bridging theory and practice of film archive, a crucial and recurrent theme during a conference that attempts to gather together scholars and archivists. The debate/conversation following Fossati’s talk, touched also some of the issues related to the use and contextualization of archive audiovisual material in our digital and Internet era. This heated discussion point was actually at the core of the panel presented by the EUscreenXL team on June 20th, titled “Perspectives on the Contextualization of Audiovisual Online Archives: Access and Publication Formats.”

The panel was scheduled in the final session of the conclusive day and it was chaired by Berber Hagedoorn who first gave a brief introduction on the EUscreenXL project. The general aim of the panel was to propose and critically discuss possible strategies for the contextualization of online archival materials. Indeed, the different presentations considered formats for enriching content through remix practices and publication formats, as well as strategies for dealing with scarce metadata.

Eleonora Maria Mazzoli opened up the floor with her presentation on “The Online Audiovisual Essay”, in which she presented an in depth analysis of the audiovisual essayist practice. In particular, she tackles into the challenges and possibilities of this new and potentially disruptive scholarly practice as it struggles to find on the one hand, its own expressive capacities in terms of formats, composition and narrative structures, and on the other, its academic recognition and value. Underlying this discursively contested practice, emerges the attempt to bridge digital media, visual art and academic research which could have great potential for researchers now and in the near future.

In her talk “Let’s Marathon!”, Mariana Salgado argued on the need of archivists and media scholars to use formats such as cultural camps, marathons and hackathons as research tools that could facilitate creative re-use of audiovisual content and stage co-creation encounters within designers, developers and researchers. One of the strong points that Mariana addressed concerned the need of a strong push for open access of audiovisual archive materials, which is often overlooked by researchers, who seem instead more concerned about their own access to the AV materials rather than a wider openness to also other creative actors or to the general public.

Finally, through her work on ‘Enriching Access to Socialist Television Histories Online’, Dana Mustata challenged the notion of archival access beyond issues of content availability and user functionalities and approached ‘access’ as being culture-sensitive. Drawing upon a pilot study conducted by the European (Post)Socialist Television History Network with the support of the Television Studies Commission of the International Federation of Television Archives (FIAT/IFTA), she discussed a series of ‘good practices’ on how to access online television material from Eastern Europe. These ‘good practices’ referred to contextualizing sources, user functionalities and metadata filters that help enrich online archival material from this region in a way that restores some of its originating context.

The audience appeared enthusiastic about the topics and posed witty questions to each of the presenters, stimulating a vivid discussion on the role of the audiovisual archives, the future possibilities of the audiovisual essays, and media researchers’ practices.
In conclusion, the conference overall was a positive and fruitful experience which gave us insights into theoretical as well as practical works relevant to the future of archives and archivist practices, and therefore, also to the future developments of the EUscreenXL. 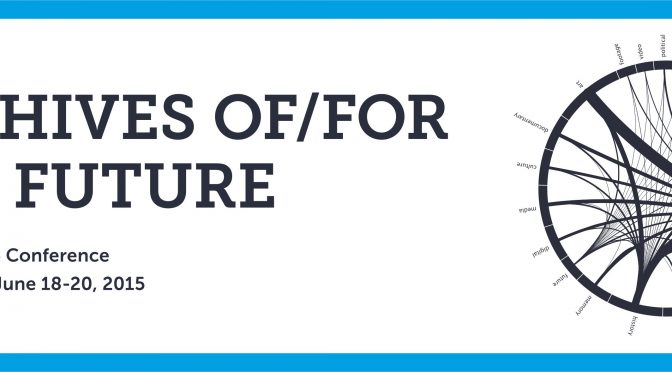