Co-ordinated by the EUscreen Foundation, funded by the Evens Foundation and supported by EUROCLIO topic-wise the project focuses on changing borders and migrating groups and individuals as a result of regional, national or international conflicts in Europe. The project’s ambition is to create a number of engaging and interactive learning activities provoking critical thinking, use of digital source materials and media literacy. First beta versions of the activities will be tested with European history teachers in April 2020 at the EUROCLIO annual conference in Serbia.

The team, which consists of archival practitioners, historians and educators, as well as external experts, came together on October 30th and 31st, at the National FIlm Archive – Audiovisual Institute/ FINA (Warsaw, Poland) to kick-off the project and begin with the co-creation. The workshop on the 30th and 31st of October focused on narrowing down the scope and coming up with different interactive activities that students can partake in.

As a starting point, 3 specific case studies showcasing various aspects of mobility and migration were selected. The case studies were inspired by 3 short videos  created as part of “In Between?” (2016-ongoing); a European initiative created by the European Network Remembrance and Solidarity/ ENRS (also project partner in the pilot) investigating the history and dynamics of European borderlands. They incorporated local narratives as well as visual and audio documentation of research using the oral history method. These three videos will act as the key A/V elements allowing students to eventually dive deeper into the local, personal stories and bigger historical issues and topics they depict. The first case study focuses on the city of Mostar, a city in Croatia that has been heavily affected by the Balkan war. This case study was presented by our project partners from Documenta in Croatia. The second case study looks at the Catalan cross-border region and was introduced by European Observatory on Memories from Spain. Finally the third case study, zooms into the Polish Lithuanian border and was presented by Borderland Foundation from Poland.

The partners worked together to understand each others case studies, and build connections between them as well as come up with interactive exercises for the students. During the workshop, @magdarysuje was present to create graphic notes. A large part of the project will be using visual media and aids to help the students engage with the topics. The idea is that by making use of visual media, archival and new, the students will be able to make sense of and look critically at often complicated topics, such identity, mobility, and conflict.

The next steps in the project will focus on fully molding the three case studies. Writing guidelines and information texts, shaping up the learning activities  that can be understood and used by students as well as compiling “archive banks” from EUscreen and Europeana that students can make use of to complete the activities.

You can view the videos of the case studies here: 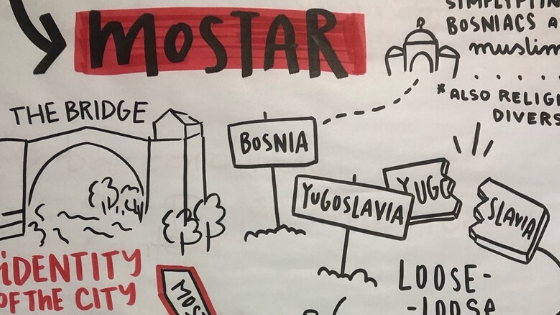