Mirosław Filiciak is an Associate Professor in Cultural Studies at SWPS University in Warsaw, Poland and also one of the esteemed lecturers for the MediaNumeric programme. During the first MediaNumeric course in Paris, France, Mirosław shared his knowledge on media ethics and the social impact of journalism and media transition with the course’s twenty students. What are his thoughts on the role of new intermediaries in our society? On how big data poses a threat to data visualisation in the media? And on how the MediaNumeric students can become critical participants in the field?

Mirosław defined his goal as a lecturer for the first MediaNumeric course in Paris as two-fold: “Firstly, we’re training a new generation of journalists by giving them skills they can use in the practical field, all the while keeping the broader perspective in mind. We are teaching them to not simply be observers, but to be critical participants in the ever-changing media industry. Secondly, we’re filling a gap that most journalistic and media curricula lack. Navigating the landscape of new intermediaries is a challenge, not just for university curricula, but for present and future journalists, and for society as a whole as well.”

The minefield of media ethics

Contemporary media in terms of ethical problems “is a minefield” says Mirosław. “We have our traditìonal problems, like how to do good things and make ethical decisions, but we also have those new intermediaries who have a somewhat blurred position when it comes to ethics.” Social media don’t produce their own content, but the filtering processes through their algorithms have a heavy impact on the information society is exposed to. This fact is also linked to the world of data manipulation, not just through algorithms, but through data visualisation as well. So is it just the development of new intermediaries that make media ethics such a tricky matter? Historically, deciding what is right and what is wrong has always been, and will continue to be, an issue:

“It’s very easy to make an ethical distinction on something that happened eighty years ago; history has already judged those events and people, so we already know what to think about it.”

Media ethics are more important than ever with the evolution of big data. “Big data can be a great asset to journalists, but we need to maintain a level of critical distance. There’s an ever growing quantitative trend in media and society that we should remain suspicious of. We mustn’t lose the people behind the numbers.” Mirosław is an advocate of a mixed-method approach when it comes to the use of data.

“Quantification is great as it can give you very interesting new insights, but numbers don’t tell stories by themselves, people tell stories.”

So how should the MediaNumeric journalists of the future put such a mixed-method approach into practice? “The biggest part is that you shouldn’t believe in objectivity” states Mirosław. “Knowledge is situated, every story we tell as journalists we tell as ourselves. We are actors in the field we are researching and some stories should be more about big datasets, while others should focus more on interviews. What set of tools do I have that I could employ in this research? What is more suitable and what obstacles may I run into? And most importantly, you must always consider which ethical problems you may face.” Mirosław touches on the subject of how a mix of quantitative and qualitative data can provide a more honest and transparent visualisation of data to society:

During John Oliver’s climate debate on an episode of Last Week Tonight the comedian visualises how such a debate should be represented in the media. If a poll was taken among the public whether they believed climate change is real or not and the results are 97% believe and 3% do not, then why do we always only see one climate believer and one climate denialist invited to debate the matter in the media? This can be misleading as the public now sees a 50/50 division on the topic during the debate. A more accurate representation of the data would be to invite 3 climate denialists and 97 climate believers to debate climate change. While fitting a hundred speakers onto a television set may pose a logistical challenge, it is, however, a great example of an accurate qualitative representation of big data.

Algorithms confine the beauty of our diverse society

“We love to think that the media are the means for debate and communication and many people hold an idealistic belief that the media are part of the public sphere, but it’s more of a calculated public sphere” says Mirosław. “We only get to see the part that is calculated by algorithms and that’s a huge problem as those algorithms are mainly there to generate profit for intermediaries. The algorithms ensure that the public can extract data that largely confirm their already existing beliefs. This is a very toxic development when it comes to democracy as we need a fair representation of people from different backgrounds, from different economical, political, cultural backgrounds, especially in regards to conflict. People are different and that’s the beauty of our society.”

The MediaNumeric students have grown up in the world of new intermediaries, algorithms, big data and the social impact these all have. With his lectures on media ethics and the social impact of journalism and media transition, Mirosław hopes he has transferred his knowledge into something useful that can allow the students to instil a societal pressure on the media in their professional futures. “I’ve noticed during this week that the students don’t just want to be ‘good’ journalists, they want to create something valuable for others and that societal value is why the MediaNumeric programme is so essential for the future of ethical media.” 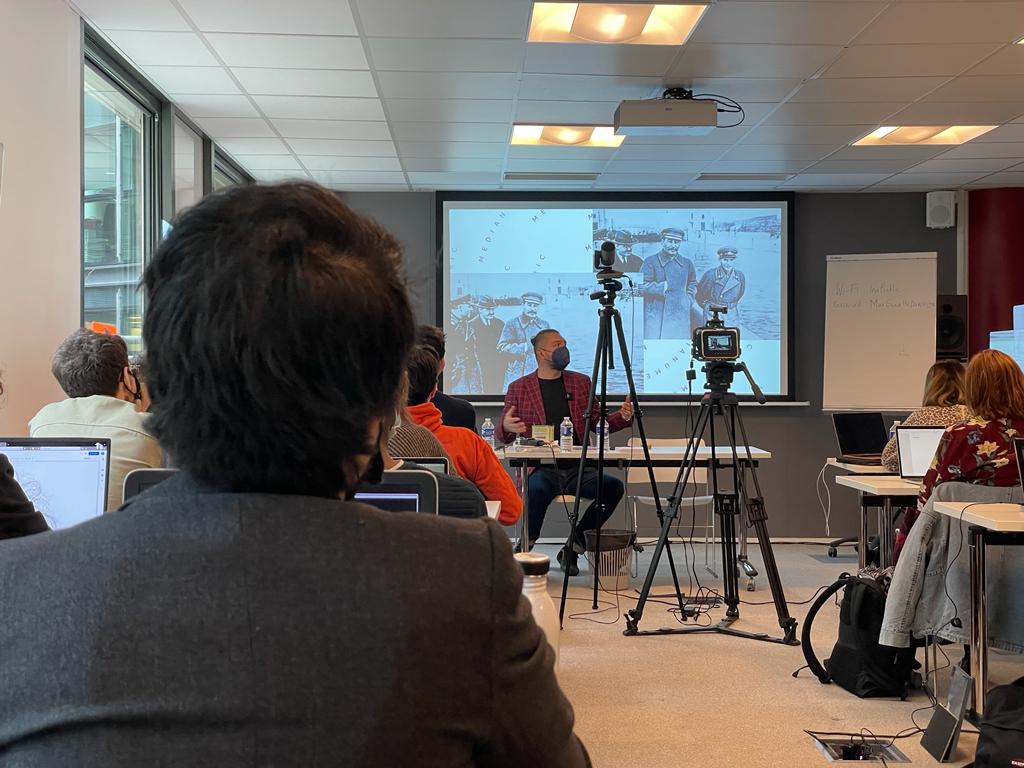